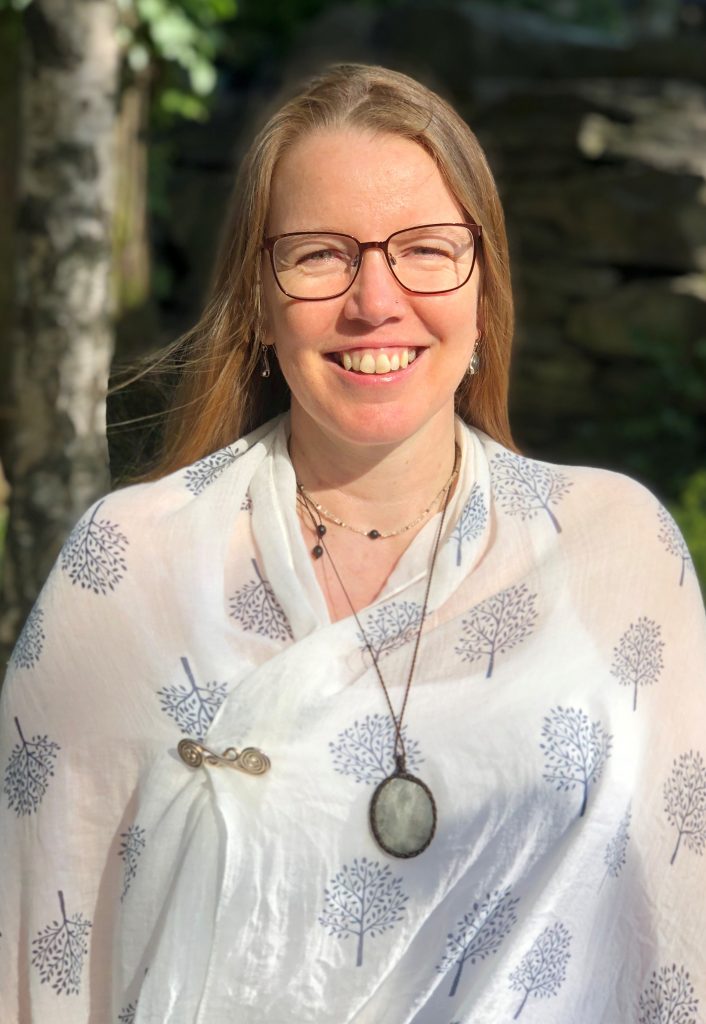 I grew up in Australia, lived in England through my 20’s and 30’s and since 2006 have been living in Norway with my Norwegian husband.

As a kid I loved to dance and I LOVED animals. On Sundays my Mum and I would dance to  Greek Zorbas music but sadly my Mom passed away when I was 16. This was however my introduction to dancing, something I which I have loved ever since.

Animals were however my greater passion. I wanted to be close to them, love them, and feel their love in return I was especially drawn to horses. By the time I was 11,  I had memorised very breed of horse in my favourite horse book (and thus when I moved to Norway and saw a Fjord horse for the very first time I knew exactly what breed it was!) It was also at about the age of 11 that I realised we could communicate with horses, in fact all animals. I don’t remember exactly what age, but I remember the horse, Rhapsody in Blue, my cousin’s dapple-grey gelding, and I remember exactly where I was standing and what I was thinking. It wasn’t so much that I thought we could communicate with animals, but that it didn’t make sense that we couldn’t. To this day I don’t know how that thought came about, I hadn’t been conscious of ever being able to do telepathy, but for some reason, I whole-heartedly believed in it.

You know the saying life is what happens when we are busy making plans? Well, while I was obsessed with horses, my Dad had bought a yacht and I had 2 choices, stay at home, or go sailing. I chose sailing. (Which is really no surprise really when you look at my astrology chart – mostly Air signs in Water houses!) To me this was the opposite of being with horses! Sailing = Wind and Water, Horses = Fire (Sagittarius is the symbol of half horse, half man and is a fire sign) who are Land (Earth) animals!

Circumstances didn’t allow me the opportunity to grow up with my beloved horses but at age 11 we welcomed a German Shepherd into our family.  I loved Jack so much I would try and would try to hug him any time I could, like when he was eating for example because he was standing still and pre-occupied so wouldn’t try to get away from me. This, as you may imagine, did not go down well. I recall at the time something in me screaming out that it was not going to end well but I ignored it and he turned and nipped me. It shocked me enough that I didn’t try to hug him while he was eating again. But boy oh boy did I want to be close to that dog. I just couldn’t get close enough. Then, one fateful day just a couple of months after my Mum died, Jack bit me. He had my whole forearm in his mouth. After that night I would be able to look into Jack’s eyes and know if today was a good day and if I could go close to him or if I had to keep my distance. That was the beginning of how I learned to listen to animals.

My love of animals drew me to England where I was to train as a falconer so I could come back and work at a Bird of Prey Sanctuary that was opening up near Frankston, Victoria in Australia. I worked at Dartmoor Wildlife Park as a full time volunteer in the bird of prey section for 2 months.I went to sleep to the sound of roaring and woke up to the sound of peacocks. It was during my time in the UK that I felt more home than I ever had in Australia and I decided to stay indefinitely. I didn’t like the way many of the birds and animals were treated at the zoo, some things down right horrified me, so I left and occasionally volunteered for a sweet lady who ran a private shelter for birds of prey. I also spent time with some falconers but after a couple of years I realised what I loved more than anything was simply seeing them flying in the wild, unhindered by humanities wants and desires.

My ex-husband and I loved walking in the woods and decided to bring two standard poodles into our lives, Zac and Ollie. As often happens with pedigrees they both had quite serious health problems. The first one to show his problem was Zac who had an epileptic fit one night, I thought he was dying. That sent me down a path that would completely change the direction of my life. I’m not sure where the yearning to look at a natural solution came from, but it may have been my Dad because in the 1990’s he developed an interest in health food which had apparently rubbed off one me. In a search for solutions I visited the local health food store which opened my eyes to so much more than eating differently.  I met so many wonderful people over the next couple of years and in 2004 I was invited to a workshop with an animal communicator….

I first met South African animal communicator, Wynter Worsthorne, in the town of Ivybridge in Devon, England. It was a 2 day, weekend workshop. Wynter taught us that it was in our nature to be able to communicate with animals and in fact all of nature but that we had lost that ability millennia ago and since that time humanity has largely become detached from nature and animals. She shared some amazing African beliefs and stories, I hung off her every word. This wasn’t just music to my ears, it was music to my soul!!! Wynter then went on to share the story of Linda Tucker and the White Lions of Timbavati.  I was gobsmacked as I had first heart about Linda and the White Lions only a few months earlier during a talk at the Pythagorean Society in Plymouth (and would again just a month later at a talk by Diana Cooper). You know what they say about synchronicities and ‘three times’….

Wynter then guided us through our first communication where she asked what had happened to my friend Clare’s dog, Bob, the previous day. Before Wynter had even finished asking the question I had a picture flash in my mind of yellow and black stripes. My mind immediately analysed that Clare had horses so it was probably something to do with the horses and then I saw a flash of him being kicked by a horse. Right? Wrong. He had been stung by a bee…. I knew then, without a shadow of a doubt, not only was animal communication real, but that I COULD DO IT! This is where I first learned, and in my guidance for people learning to be animal communicators, WRITE EVERYTHING DOWN EVEN IF IT SOUNDS CRAZY! Wynter held another workshop at Clare’s just a month later, and I was there for that too.

Synchronicities stick. Fast forward to 2006 as I am about to move to Norway and I met Wynter in South Africa at the White Lions of Timbavati where I met the amazing Linda Tucker, author of the profound book Mystery of the White Lions, Children of the Sun God, where I spent the weekend learning more animal communication with Wynter and communicating with the White Lions. This was a monumentally life changing experience.

After 6 years in Norway I was blessed to travel back to Timbavati for the White Lion Leadership Academy. Another life changing experience and this time instead of a weekend I was there for over 6 weeks! This is where I met my soul. Or rather got to know myself at a soul level. There was pain and there was bliss. There was necessary healing and there were realisations. There was deep grounding and connecting to the Earth and undeniable spiritual experiences. I got many answers to my challenges. This was the first year of the White Lion Leadership Academy which opened on 5 July 2012.

During my 3rd stint at the White Lion Leadership Academy, in December 2013, one of the teachers, Leslie Temple-Thurston said to me ‘I think things are going to change for you very soon’… Within 3 weeks I had slipped a disc in my neck and was off work for 21 months. That was another extraordinary life changing time for me when everything sped up. While I was healing physically, I was simultaneously doing the work to heal myself emotionally. It also gave me the much needed time and focus to get serious about furthering my animal communication studies. In 2016 I qualified as an animal communication practitioner with Wynter on her Animal Talk Africa Online Academy. I have been working for Wynter since 2015 enhancing her already transformative course.

In my quest to work with animals I trained as an energy healer and a Tellington Ttouch Practitioner. It was during my Ttouch training (that Wynter had recommended to help Zac recover after his epileptic fits) that I woke up to how that fateful day with Jack was actually not ok. That it wasn’t my fault he had bitten me and that lack of knowledge and understanding of dogs, and the training he had been subjected to, had led him to being a very reactive dog. I had also become very nervous around dogs, especially big dogs. Ttouch helped me as much as it taught me to help dogs. However, I knew it back then, even if I couldn’t have verbalised it, Ttouch was just a steppingstone. And while I appreciate so much what I learned during Ttouch, and do love to teach it to others, animal communication was, and still is, my passion. 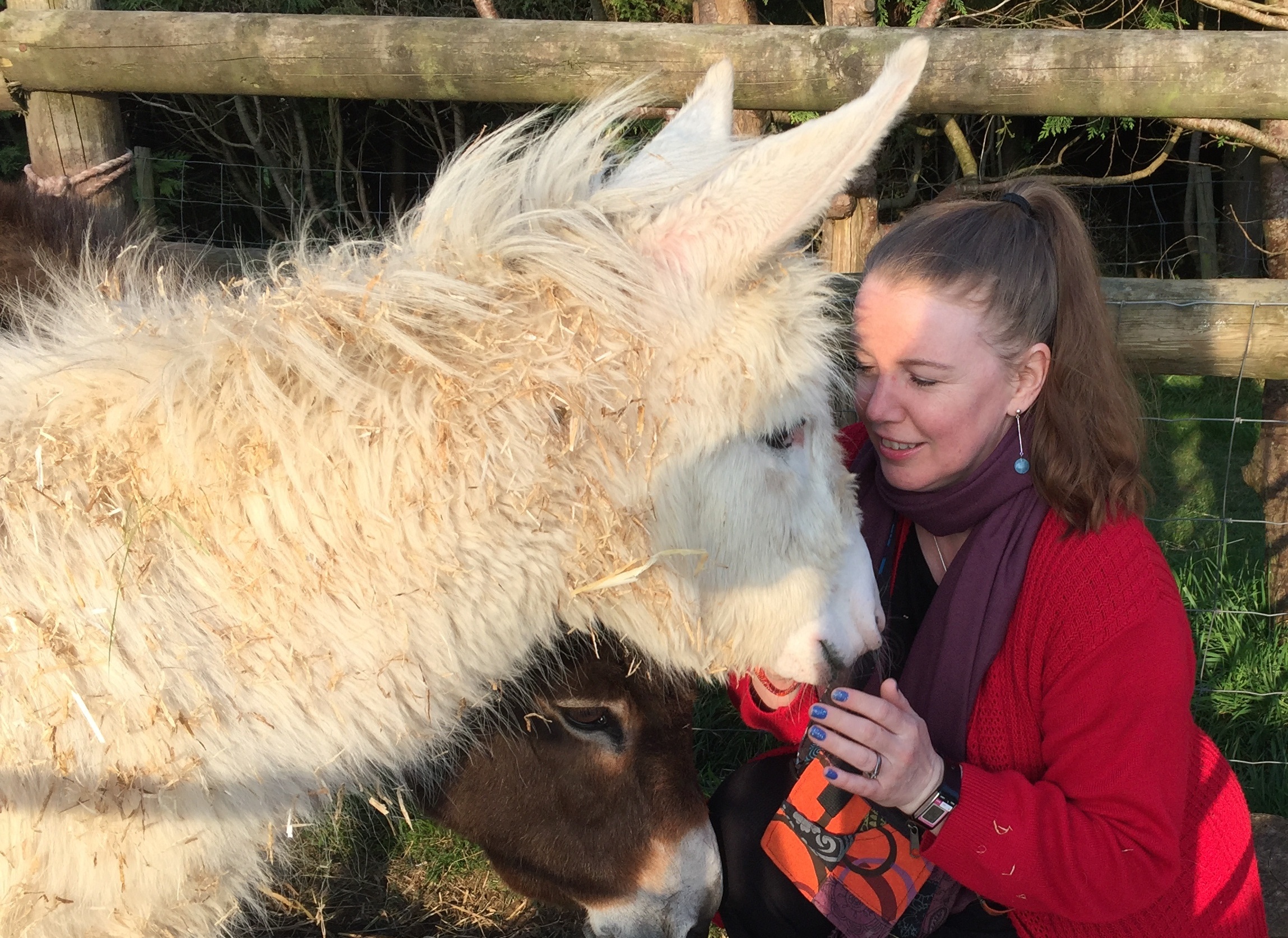 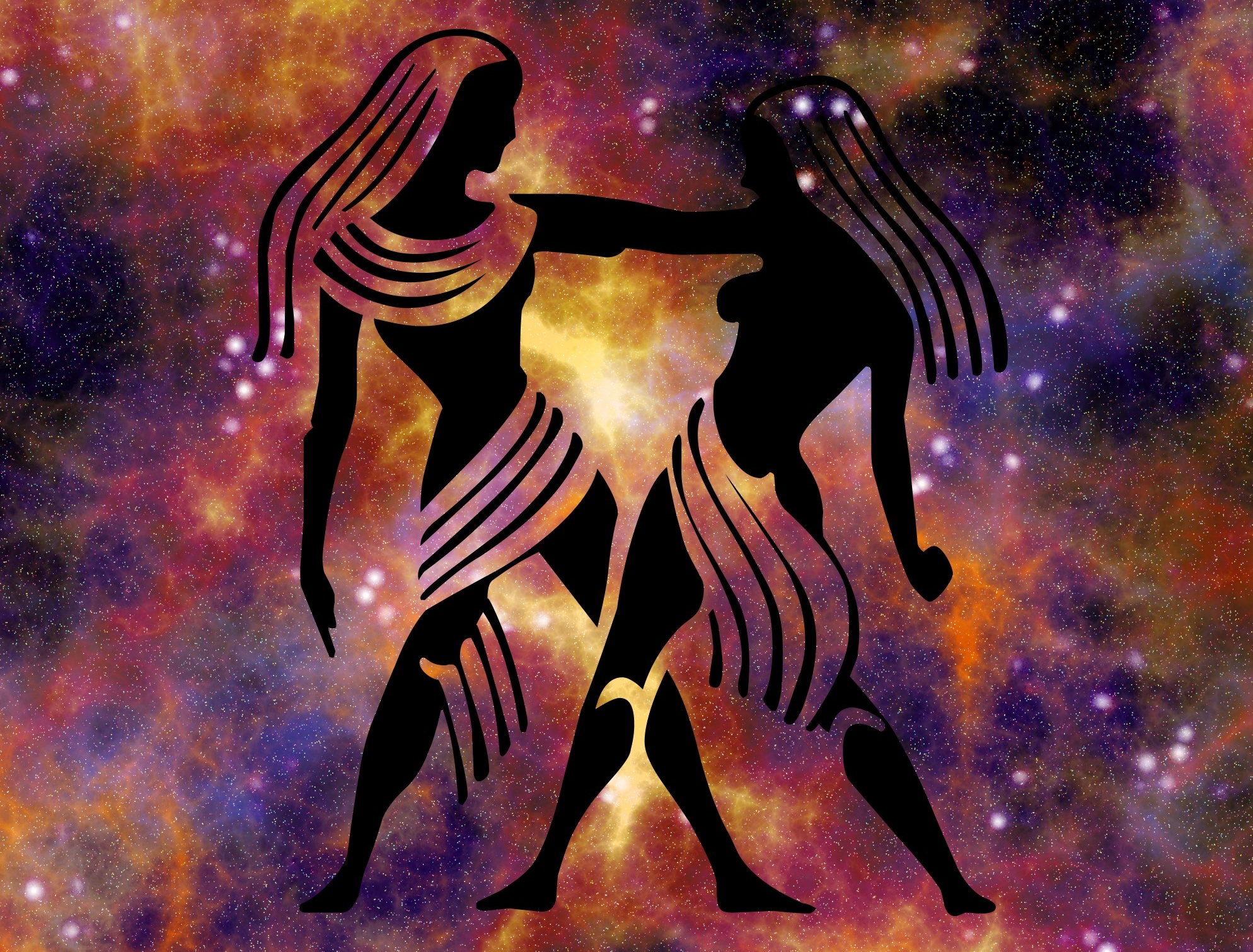 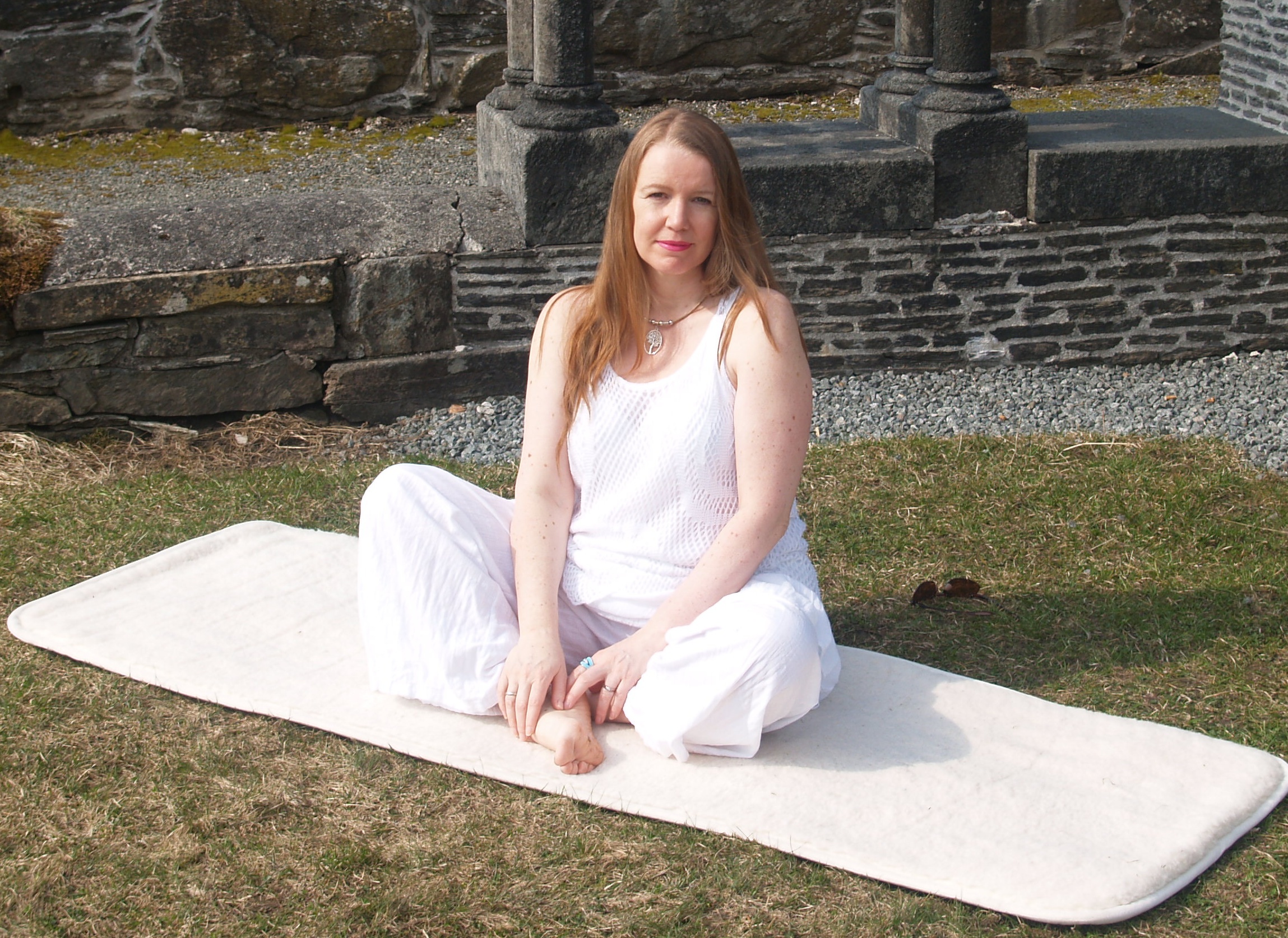 Meditation has been an integral part of my life for nearly 20 years. I have learned many different types of meditation and recording guided meditations is one of my passions. 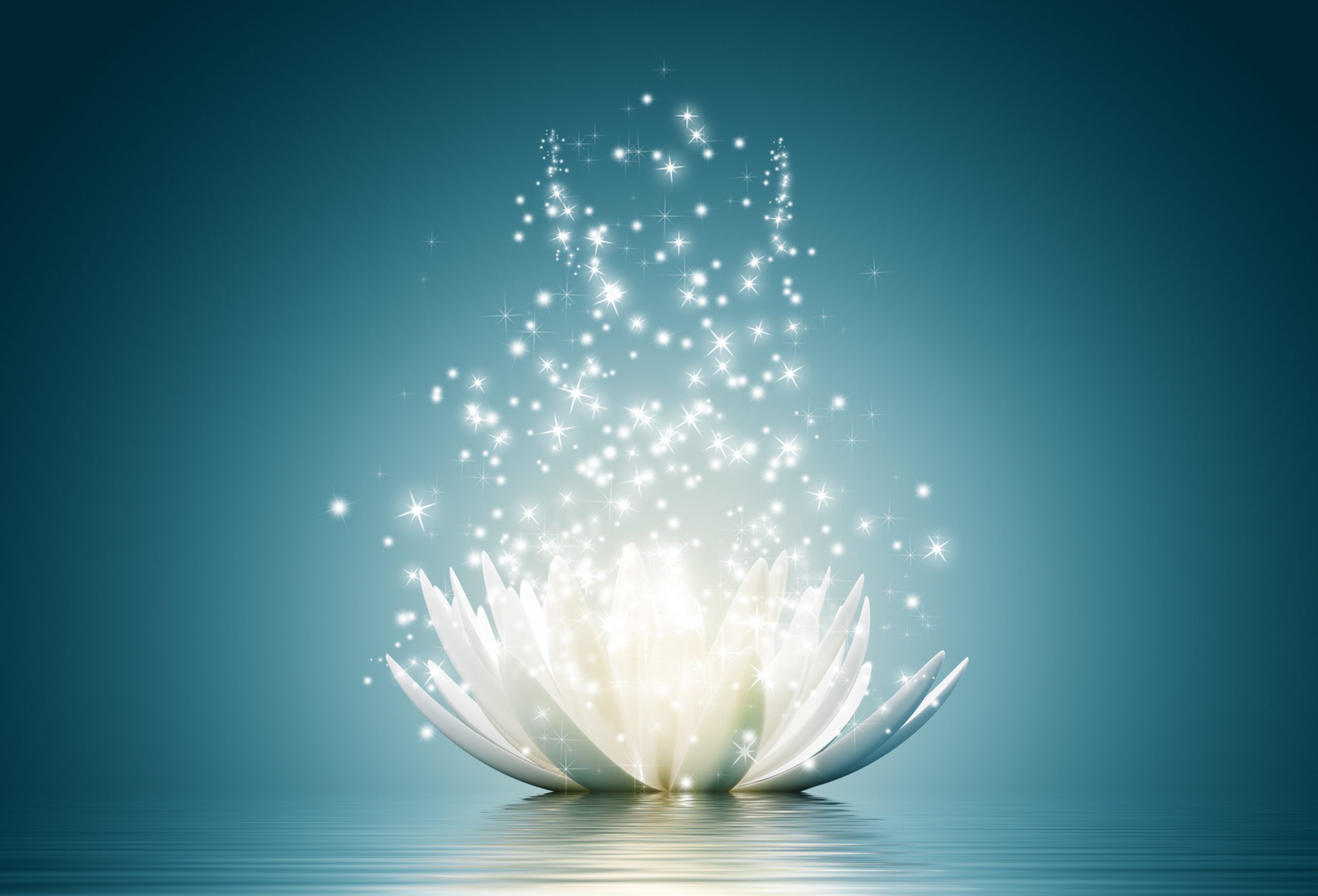 I qualified as an energy healer in 2005 at the
Plymouth Natural Health and Healing Centre
in the UK for both animals and people. 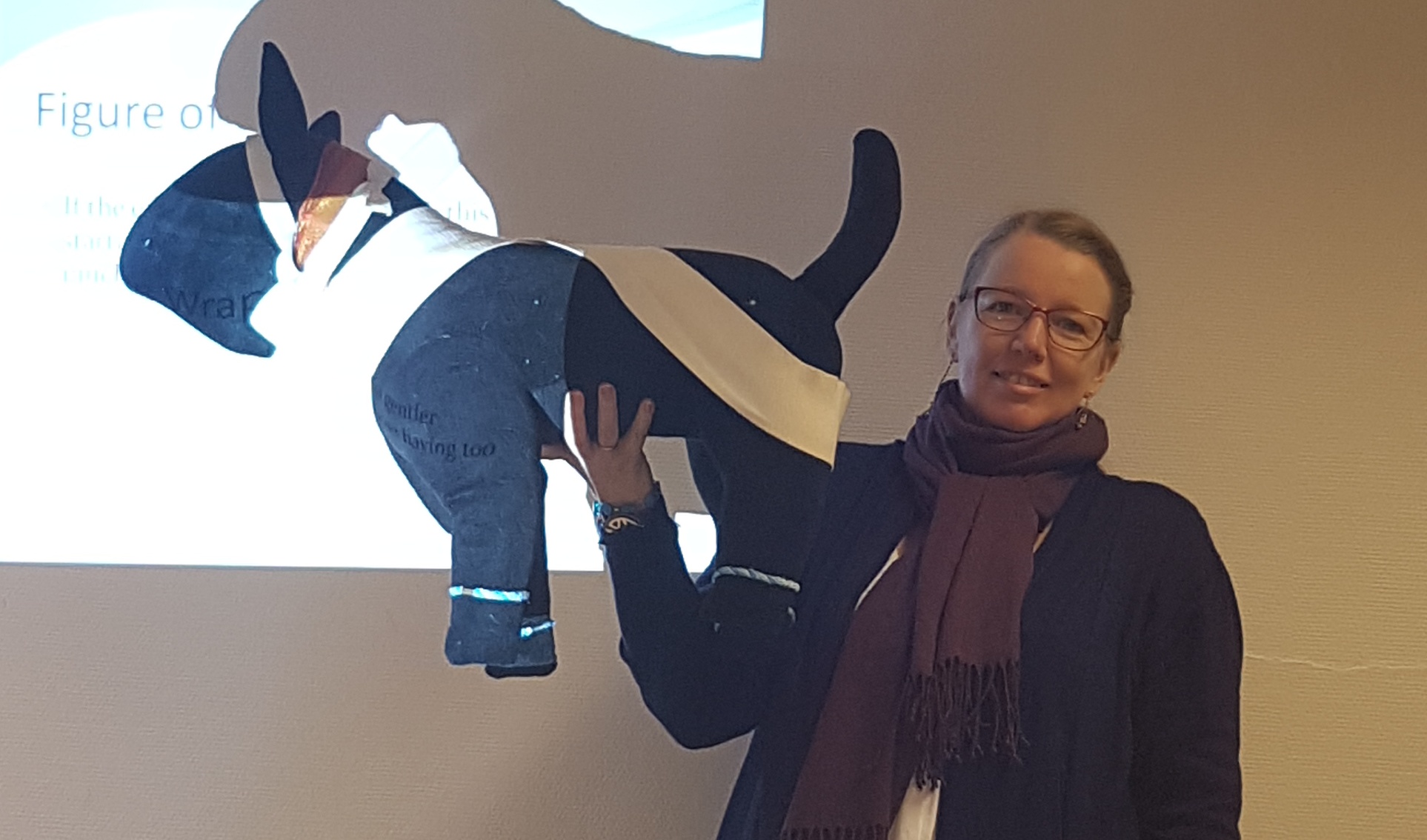 I qualified as a Tellington Ttouch Practitioner in 2009
at Tilley Farm, Bath, UK

Bach Flower Remedies are an amazing emotional support. I have been using them for 20 years for myself, my animals and friends.

12 of the most amazing weeks of my life spent getting to know myself, my gifts and finding ways through challenges and ultimately how to help people and animals in my unique ways. Many of my qualifications have come about because of my time spent at this magical place